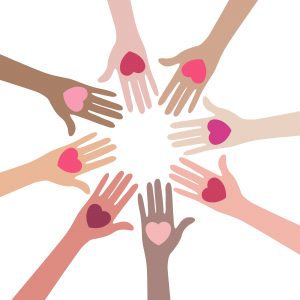 Last year I was moved to be in the company of such amazing panelists, and I still have that audio available to listen to here. For anyone dealing with trauma in their writing, it’s a must-listen. This year our panel was smaller, with Amy moderating, and Hollye Dexter, Victoria Zackheim, Teresa Stack, and myself as panelists.

While last year was so intense you could almost feel the collective heartbeat of the room, this year was more of a lovefest—which Amy Ferris happens to specialize in. Writerly love. Amy is just like this—gushing, effusive, complimentary—and there’s something about this energy that is contagious. That makes you feel like you can conquer the world. That anything is possible.

Writing is such a solitary experience. If you’re lucky, you’re a little euphoric when you write. But for most it’s just plain hard. Sometimes much worse than that. Vivid imagery came up on the panel about the writing process: vomiting; gut-wrenching; bleeding; blood-letting. It’s extraordinary how universally writers experience writing as locked inside of them and needing to get out—and sometimes the only means of release is quite violent.

And it helps to know that you’re not alone in your anguish. In the past two weeks I’ve been with countless writers expressing their doubts and fears about even calling themselves writers, or confessing to what they’re writing. I ran into an author I know this weekend (now at AWP—yes, too much travel this month!) who’s publishing her third book, and when I asked her if she’d ever thought about writing memoir she said yes, in fact she’s writing one, but she won’t refer to it as a memoir because it’s “too embarrassing.” Another aspiring memoirist was standing right next to her and nodded her head vigorously. “I know what you mean,” she said.

The power of a lovefest is that it infuses you with strength. When you’re in love you feel like you can do anything. You have extra endorphins coursing through your veins, and your physical chemistry is in fact altered. It’s possible to do this for ourselves as writers, but it’s difficult to do it alone. We need support, and the only way to get it is to cultivate it.

One of my old Seal authors recently posted something on Facebook thanking me and a bunch of other people for taking a chance on her, for opening doors for her to allow her to live a creative life. I was moved to be on that list of people thanked, and I saw how this author had, over the years, manifested her own writerly love. She didn’t just take. She’s given generously, and with her whole heart. She’s always expressed her gratitude—unabashedly. She’s genuinely celebrated her own success, but also the success of others.

Lots of writers succeed who are, let’s face it, SOBs, but those writers operate from a scarcity mentality. If others succeed, something will be taken from them. If they support others, there won’t be enough for them. Perhaps because we’re so vulnerable when we’re expressing our truth, nowhere is it more important to support one another than in our attempts and efforts to put out into the world our various forms of expression. Let yourself be part of a lovefest in the writing world. It happens at writers’ conferences, but also at literary events and reading. It happens when writers come together to read their work at salons and other events. It happens when writers come together in writing groups. It happens on social media every day. But you do have to seek it out, and you do have to participate, in order to bask in the glow.

What’s the most recent or memorable lovefest you’ve experienced in your writing life?

Listen to this year’s “Women Write Their Lives” panel.

See you next month!