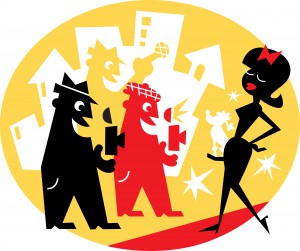 I write a lot about the changes happening in book publishing. I tend to cover the rise of self-publishing, new models of publishing, and the ways in which traditional publishing is consolidating and contracting, making itself inaccessible to aspiring authors.

Neeti opened with these inspiring comments:

Inspiring to writers at large, that is, but not necessarily inspiring to those writers in the audience hoping to land an agent.

Sterling Lord is an incredibly reputable agency, but I’ve never heard an agent lay it out there quite so starkly to a room of aspiring authors that they only work with a small section of the publishing industry—with large houses.

There are, after all, only five large houses left. The recent acquisition of Perseus Books Group by Hachette begs the question of how long the world of mid-level publishing can continue to thrive.

Laura Mazer is with Seal (soon to be part of Hachette). Her opening comments were no less encouraging to authors aspiring to publish traditionally:

“I’m not going to defend the publishing industry because it’s definitely broken. Most books do not earn out their advance. 60% don’t. As far as 88%. Not even necessarily big advances. If we’re going to invest in a book, we need to somehow figure out if it will bring back our investment. I have to judge, make a best guess. One thing we look at in proposals is where have you taken this idea before? Blog? Online? Have you been on TV? Where have you tested your argument? Has what you’re bringing us risen to the top? It needs to make me want to bring you in and get you to rise and bring us back what we put in. We need to look at the proposal and see if it’s got what’s going to take to bring back in the investment.”

I, for one, appreciate that Neeti and Laura are telling it like it is. Their comments are a wake-up call to aspiring authors who think that their books will be published just because the writing is good. Great, beautiful writing is a simple prerequisite these days, hardly enough to land you an agent, much less a book deal.

The hard truth is that most of us do not have that shiny quality that agents and editors are looking for. And it’s not your fault if you don’t. That allure is something that generally takes years to build and grow. The industry talks about this shiny quality in terms of your author platform, which entails a lot of what Laura pointed to in her comments. Are you online? Do you have a successful blog? Where have you test-driven your ideas before? Where novelists are concerned, it’s less about where you might have test-driven your ideas, and more about you as a brand or a commodity. Have you ever noticed who’s getting the big book deals for fiction out of New York? They’re typically young, hot literati celebs with MFAs from well-regarded programs and connections to famous authors, or they’re well-established authors who have loyal followings they’ve been cultivating for years. I’m not saying that the Big Five aren’t ever publishing unknown debut authors; they are. But who are you to compete if you’re a debut memoirist or novelist with a negligible following and zero star power?

Most of the authors I work with still dream the dream of landing an agent and a big house—a package deal. From there the dream generally tends to morph, depending on what happens. Oftentimes clients of mine get an agent, but no book deal is forthcoming. The agent, try as they might, simply cannot sell the book. For those authors who can’t land an agent, or whose agent can’t sell their book, the dream may morph a bit. Now they’d be happy with a small house, or even a university press. Many of them start to weigh other options. They start to consider hybrid publishing, or self-publishing. Some authors get from Point A to Point B more quickly than others. Some are loath to let go of the dream. I get it, but it’s a lot like coveting that golden ticket. So many dreamers, so few spots.

The firsthand experience of shopping a book, as those of you who’ve done it know, is pretty grueling. When authors ask me how long they should keep at it, my first question is: “What’s your tolerance for rejection?” My second is, “How long do you want to wait for your book to get published?”

I used to believe that anyone with enough persistence could get a book deal. I no longer believe that’s true. The industry is simply contracting too too tight, and there is too much competition for a very limited number of spots on traditional presses. On the bright side, there are more amazing options for getting your work out there than ever. Hybrid and self-publishing are on the rise, and the standards are increasing. Self-published authors are doing it right; they understand that they need to create books that compete with their traditional counterparts. Higher standards are good for readers, and good for the industry.

Well, the writing is on the wall. The vast majority of you will experience the letdown of the publishing industry. In some ways, it’s a recipe for failure, whether or not you land a deal or not. It’s the select few authors who are making their publisher enough money that their publisher is actually happy with them. If you’ve been on this journey a while, consider the insight from Kamy Wicoff that traditional publishing has now begun to cater to the 1 percent.

“I had the big house experience. I know what that looks like. [At the time (2006),] focus was shifting from the house to the author. I did hire a publicist. I spent money I hoped would come back. You have this idea that you’re going to have this team of marketers. It didn’t happen. You can’t expect that. I call this the 99% vs. the 1%. It’s only 1% of authors who get any focus from the publishers.”

This is my experience of traditional publishing, too, but most authors don’t understand going in how little resources they’ll get from their publisher if they get one. And on that downer note, it’s perhaps time to ask yourself a new question: Are you ready to embrace being part of the 99%? When you do, a whole new world opens up to you. It’s a world where you call the shots. Where you green-light yourself. Where you stop feeling so discouraged because you take back ownership and make your publishing dreams come true.