Are you ready to call yourself an “author”? 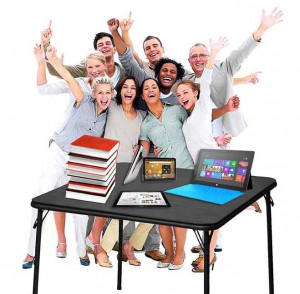 Last year, before I finally wrote What’s Your Book?, all I knew was that I wanted to publish a book someday. I knew I had a book in me, but there were barriers. Time. A big one for me since I had a one-year-old and a full-time job at the time. The messages in my head (in my case remnants from a high school literature teacher who told me my writing wasn’t very good) telling me I would never be an author. (Read more on these two barriers here.)

But then I just did it. I decided, as I wrote about last month, to green light myself. Having spent my entire career in book publishing, I knew I didn’t have enough of a platform to publish traditionally. In fact, most authors don’t.

But how do you get a platform? The link I provided in the last paragraph is from a newsletter I wrote in 2008, when platform was even less of a buzzword and absolute prerequisite to traditional publishing than it is now. In that post, I wrote that one way to build a platform is to get published. “If you can say you’ve been published, you have a leg up on the competition.” Then I was talking about getting a byline, but in the past five years, a newer and better option exists: Publish your book!

A couple weeks ago a young woman, still a college student, contacted me for an interview for her website, PDXX Collective. When she ran the copy by me, I seriously inspired even myself.

The problem, Warner said of traditional publishing, is that publishers often discriminate against the author who lacks an online presence, or a “platform,” the industry buzz word that means you have to have a big following in order to get published.

“The traditional press is like, ‘Wow, you’re great, but I haven’t heard of you.’ There’s something wrong with the excessive amount of pressure authors face to have an enormous following just to get a book published. People don’t go into writing because they’re social media experts—and people need a book to build a platform. I think we’re offering [referring to She Writes Press] a sophisticated, smart thing to authors who, for whatever reason, are barred from traditional publishing.

“The biggest problem in traditional publishing,” Warner said, “is that the extreme focus placed on an author’s platform is actually hurting the quality of work getting published. Snooki and Paris Hilton can get book deals, but really amazing how to buy valtrex online memoirists can’t.”

So here’s my plea to you. Stop behaving as if the only good way to get published is to publish traditionally. If you feel this way, you’re behind the curve. It’s still a solid goal, but not to the detriment of your work, by which I mean, don’t let the traditional gatekeepers stop you!

Also, if you really want to make a go of becoming an author and agents aren’t lining up to represent you, and publishers aren’t lining up to publish you, take a stab at figuring it out yourself. In my final season at Seal Press, I acquired two previously published books, Replacement Child and Fast Times in Palestine. So if your sights are set on traditional publishing, self-publishing can be a way in.

As for me, I published with She Writes Press, the publishing company I co-founded. I’ve sold over 500 copies of my book since September, modest by traditional standards but really good for me since I set a goal to sell out 500 within the first year. I’ve seen two royalty checks (yay!) and I’ve directly sold a lot of copies at events. I’ve earned out the money I put in, and What’s Your Book? is a finalist for a Foreword Reviews Book of the Year Award.

If I’ve even begun to convince you that self-publishing is a viable option, please consider contacting me to talk about the Self-Publishing Summit I’m putting on with Howard VanEs here in Berkeley on June 1-2. It’s going to be information-packed, inspiring, and fun. Plus, we’re invested in saving you money by helping you figure out how to publish right, where to find good editors and designers, and probably most important, how to maximize your sales—especially your Kindle sales. (Let me note that the 500 copies I’ve sold to date do not include Kindle sales.)

I’ve said for a while that I’m an equal advocate for traditional and self-publishing, and I am—when it makes sense and when aspiring authors aren’t pounding their heads against a wall and feeling shitty about themselves because they’re turning over all their control to others. In these cases, the traditional publishing dream truly is more harmful than good. So consider where you’re at with your book. You might even just consider putting out an old manuscript you have as an eBook. There are so many ways to put your work out into the world. Take a first step and publish. It’s doable, legitimate, reasonable, and smart.