Why We Need Women-Only Spaces 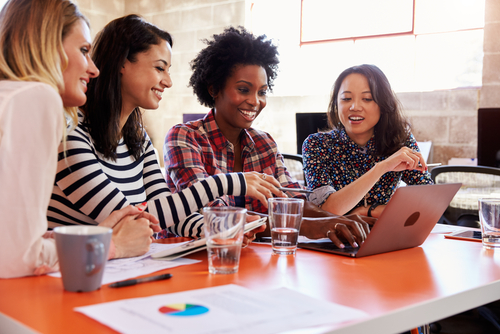 A couple weeks ago I got the kind of email I’ve come to anticipate, having worked in women’s book publishing for the past 13 years. Sometimes the subject line implies the content: “Do you publish men?” Occasionally these are neutral inquiries. More often than not, the man on the other end asks me if he can change his gender, or publish under a pseudonym. I get a lot of emails from men telling me how much they love women, as if our exclusion of them implies they don’t love (or more importantly, support) women. It does not.

But last week I got an inquiry from a man whose resentment was palpable. He informed me in a very officious way that he’d blurbed a She Writes Press book and therefore found it “ironic” that we don’t publish men. So I guess he was hoping that his support of a female-authored book should cause us to rethink our very foundation. Um, no.

My co-founder in She Writes Press, Kamy Wicoff, wrote an excellent post two years ago called Why We Need She Writes Press, which covers all the pertinent data anyone would ever need to know to see for themselves the double standard in the publishing industry: male authors are reviewed more than their female counterparts; they’re asked to write more reviews; they’re awarded more prizes; and, perhaps most damning in terms of thinking about why the status quo is so ingrained, women characters—in books and film—are consistently and systematically undercut. They’re less likely to be protagonists, and less likely in film to have speaking roles. I personally know three authors who’ve been asked by publishers to change their female characters to male characters to make their books more saleable.

Over the past 13 years, I’ve seen and heard a lot. It’s unfortunate that it often takes being in women-only spaces to hear the truth about women go through, because this means men don’t hear our stories as much as they otherwise might. The reasons we don’t share have everything to do with playing our female roles—putting on a pretty face, keeping a lid on it, playing ball. One way men can have their eyes opened to these stories is to read women’s stories—and a good place to start looking for those is at a women’s-only press.

I was 27 years old in 2004 when I started working for Seal Press, a women’s press and indie darling that had been publishing books by women, for women, since 1976, the year I was born. I was not wise enough in the ways of the world back then to see exactly how disadvantaged women were when up against their male counterparts. Thirteen years later, I’m nearly world-weary for how much my eyes have been opened to our ongoing struggles.

At a recent book reading I participated in, women read from their personal essays, which inevitably showcased experiences of repression, abuse, and disadvantage. A brave man in the audience stood up during Q&A and asked, earnestly, “How do you write your personal stories without being overcome by rage toward men?”

I felt at once so grateful and also so much compassion for his position. Women, by and large, feminists included, are not angry at men. We’re angry at internalized gender bias that holds us back and keeps us in second-tier situations. We’re angry at a culture that’s so disdaining of women’s empowerment that it undermines women’s efforts and advances. We’re angry at specific men who spew hateful comments about women’s appearances and menstrual cycles, as if these are the things that define us. Gentle male allies will find great friendships within women’s-only circles if they can simply accept that we not only need our communities, we’ve earned them. We have sought each other out for support and championing, and we’ve created alliances and networks and sisterhoods because there are no wide-open roads for women as there are for men. Any successful woman you know has stories of sacrifice and harassment, and if they try to tell you otherwise, I guarantee you they’re just not ready or willing to share with you.

So yes, we need women-only spaces—in schools, in publishing, in mentorship programs, in industries everywhere.

What a flooring experience it would have been for me to have received an email from the man who supported my female author saying, “I loved that book. I was so happy to be able to lend my name to it.” But the judgment he instead shoveled out to me was a sad reminder of how far we have yet to go. Maybe even of how far we’ve regressed in this past year. Equality is not a zero-sum game. Women getting ahead doesn’t compromise men’s power. It just normalizes the reality that women do get ahead, and that we’re as capable as men of doing so.

Kamy ended her August 2015 post with a proclamation: “Now I have a blog post I can send anybody who doesn’t get it. And so do you.”

Hopefully, now you have two.

PrevPreviousWe, the People: Beautiful Moments from The Women’s March in DC
NextThe Art of Landing and Delivering a TED or TEDx TalkNext