The Future of Feminism Panel That Wasn’t

Dear Warner Coaching readers, I have never before cross-posted with Seal, but I’m doing so because I realized I had a tremendous spike in the number of readers visiting this site over the weekend, which I think has to do with AWP. So here goes, for those of you who are interested in reading:

I flew to Denver this weekend to attend AWP. I was supposed to be sitting on a panel called The Future of Feminism, which Amy Scholder at The Feminist Press had organized quite some time ago.

We got the very last time slot of the conference: 4.30 on Saturday afternoon. I was prepared for a not-so-good turnout, but I’ve been to enough conferences to know that sometimes the biggest impact is made on the smallest groups.

When I showed up to my panel, this was the sign I saw on the door. 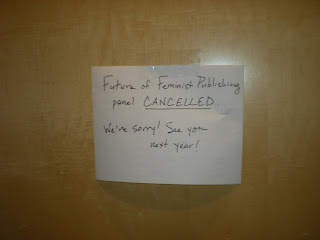 I had no notification, no advance warning, no opportunity to have made a different decision. I was, needless to say, bummed. At first I thought the conference had canceled the panel on our behalf, and I couldn’t understand why. Then, as woman after woman came by, some audibly disappointed, I started to feel genuinely upset.

One group of students from Western Washington University turned to me, and recognizing my name on my badge, asked if I would do a talk without my panel. I wish I had said yes. One of them said, “We thought it was so cool that this was going to be our last panel of the day. We were going to go out with a bang!”

As it turned out, Amy had a family emergency. These things happen. The other panelists decided, it seems, that they didn’t want to do the panel with so few people. Later that evening, at a meet up hosted by SheWrites, Lucy Bledsoe, a beloved Seal author who has a new novel out, asked me what happened. It was kind of ironic, she said. What does that say about the future of feminist publishing? And I had been thinking the same thing as I sulked back to my hotel room.

And because I wish I’d had the wherewithal to tear down that sign and just do a talk about feminist publishing, or about women and publishing at the bare minimum, I’ve composed a few thoughts that I might have highlighted had the panel happened:

1. We still have a presence.
The fact that presses like Seal and The Feminist Press, as well as Cleis and Belladonna and Firebrand, and many others (please comment and list yourselves!) are still out there publishing with a feminist mission is extraordinary. I meet with women all the time who think that feminism died with the second wave. They are thrilled to know that the younger generation is carrying forth messages about women’s equality, and that we don’t just sit idly by and think that all of the disparities have ceased to exist. There’s room for new feminist voices, and there’s a thriving online community of bloggers and activists (too abundant to list here) who are doing amazing work in the name of feminism. And lots of them are getting published.

2. There’s more than one kind of feminism.
Seal is increasingly publishing “mainstream” feminism, for which we’ve been criticized by some and commended by others. Whatever buy cheap valtrex your feelings are about mainstream feminist writers, the good news is this: they reach a wider audience. We’re expected to bring in books that can sell—that’s the nature of the book business, even though lots of books don’t. So for us to be able to say that we have feminist books that sell well is, to me, a huge win. Notably is Jessica Valenti’s Full Frontal Feminism, but there are many others. Some Seal books are overtly feminist in scope, while others simply have a feminist or pro-woman sensibility to them. That is critical to who we are, and it won’t change for as long as Seal continues to be around. I would have loved to hear what some of my fellow editors have to say about mainstream feminism and/or popular or celebrity feminism. And I want to note, in the interest of talking about a mainstream book that Seal has coming up in 2011, that we are publishing our first ever male authors*, Michael Kimmel and Michael Kaufman, who are writing a mainstream book that tackles feminism for men—and it’s actually targeted toward men (and not only their girlfriends, sisters, wives, and moms).

*It’s important to qualify here that Seal has published men in our anthologies, and we have two memoirs by trans men.

3. Women are keeping publishing real.
When it comes to accolades and honors it unfortunately seems to be the case that men are still getting more attention in the publishing industry than women. But I see women pushing the envelope. Women are bringing things that matter to their writing. Women are keeping it real. Sure, not all women are feminists, or they are and they don’t know it. This very complex issue of women and their feminisms was tacked in the Seal book Girldrive, by Nona Willis Aronowitz and Emma Bee Bernstein. In my ideal world, every woman would call herself a feminist, but what I realize more and more is that all we really need to do is acknowledge that we care about the same things and that we are stronger than our differences. Feminism can be a torturously divided movement, and I hesitate to even call it that, though I’ll leave it for lack of a better word. If I were going to leave our would-have-been audience on one note, it would have to do with coming together. I don’t think the goal of feminism was ever for women to be more divided, but it can sometimes feel like that. At Seal, and I imagine this is true for my other feminist press colleagues as well, part of what we look for in our manuscripts is inclusiveness, a pro-woman sentiment, bridging the divides, educating our audience, and owning a uniquely female perspective on whatever the topic is—be it motherhood, social issues, organizing your life, or breaking out of your career rut.

So that’s what happened. Because there are so many charged issues that come up around feminism, and because feminist publishing and feminist bookstores have been so obliterated over the past three decades, I thought Lucy’s noting that it was indeed ironic that the panel was canceled couldn’t have been more true. So I apologize to those of you who wanted to be there.

How to Be Free

Procrastination: The Source of So Many Excuses

A Quick Dip into the Literary Elite’s Hatred (or Is it Fear?) of Memoir