Why Practice Hurts So Good 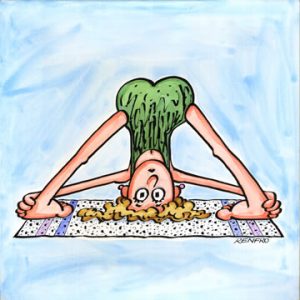 On Christmas Eve I walked into my yoga studio with the sort of set determination I had around my writing practice back when I was trying to finish my book. I wasn’t super excited to be there, but it had been three weeks since I’d gone. I knew I needed to go back, and the congress in my head was raging. The winning side was making a very convincing argument for waiting until after the first of the year. After all, it said, it’s just a week and a half away, and it’s always good to renew something you’ve been slacking on in the New Year.

I do Bikram Yoga, a very intense and strenuous and hot form of yoga. You stand in front of a mirror and have to confront yourself during your practice—whether you’re having an awesome class or a horrible one. On Christmas Eve, I had the kind of practice that felt like a form of mental torture. I struggled through each pose. I felt nauseous. I could barely look myself in the mirror. I was distracted, thinking of all the places I’d rather be. I left an hour into the 90-minute class.

Driving home, I discovered, as is often the case, that I felt really good. I was even the teensiest bit disappointed with myself for having left early, though I’m really good at making myself feel better and was able to placate that voice, too, by reminding myself that one hour is better than nothing. It was a start—another first step toward getting back into a regular practice. I’ve been here countless times before.

Regular practice—whether we’re talking about writing, yoga, meditation, music, you name it—is tough to maintain. I’m lucky, because while I have a strong love/hate relationship with yoga, I’m also addicted to it. Some of you may feel that way about your writing. I know many many writers who talk about not being buy real klonopin able to not write. This is a blessing and a curse, particularly because it means when you’re not writing, you’re struggling with why you’re not doing it.

The feeling of not wanting to do something is like an undercurrent. It can keep you treading in a no-man’s land, where you haven’t actively given up, but you’re also so far from shore that the effort it would take to get back feels insurmountable. The farther into not doing something you get, the more the congress in your head convinces you that starting back up is going to require something ceremonious. You need a New Year’s resolution. You need some form of external motivation—like an editor who likes your work, or a book deal.

Real practice, however, is not the least bit ceremonious. All it requires is showing up—on the good days and the bad days. I’m sore today, still, from my class two days ago. But that aching in the backs of my legs is such a good one—and it didn’t need to wait for the new year. I aspire to go to yoga twice a week, but I’m not making it a new year’s resolution to do so. The real reason I keep going to Bikram, after all, is the same reason I write: Because I love it. Sometimes it sucks so much I want to cry. But then there are those times with both practices—like when I have a class that makes me feel like Linda Hamilton in The Terminator, or when I write something that actually moves me to the point of being able to feel my heart swell with happiness—when I feel connected and grateful. Even if they’re sometimes inconsistent, they’re both steadies that I can rely on and go back to and that complete part of who I consider myself to be.

What keeps you connected to your practice? I’d love to hear about it.